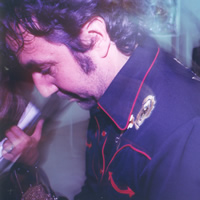 Daniel González was born in 1963 in Buenos Aires, Argentina. Lives and woks in New York and Verona.
His work is the result of researches into celebration rites and is expressed in public projects, banner-painting with sequins, and wearable one-off works which are exhibited in high-impact performances. González creates worlds that are crazy, sexy, and full of energy: spaces for freedom where existing conventions collapse. He has exhibited in the Zabludowicz Collection, London, the Musée d’Art Contemporaine, Bordeaux , and in the Witte de Withstraat festival in Rotterdam where he showed his first Pop-up Building in which he covered a historic church with cut-up cardboard, as though it were a gigantic pop-up book.

In 2008 Daniel González created a workshop-performance for Manifesta 7 and, in 2011, he took part in the Museo del Barrio biennale in New York where he installed Pop up Museo Disco Club on the front of the building in 5th Avenue. Since 2007 Daniel González has been collaborating with Anna Galtarossa on large-scale public projects. The first, Chili Moon Town Tour, reproduces a floating utopian city and it was seen for the first time in the Bosque de Chapultepec, Mexico City, in 2007. The protagonist of the second, Homeless Rocket with Chandeliers, produced in Lambrate, Milan, is the kind of “crane-installation” used on building sites, contaminated by objects and materials that refer to street culture and the freedom it transmits.
See biography