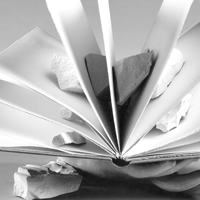 One of the main characteristics of the works of Giulio Paolini is that of forcing the thoughts and vision of the viewer into an interior sphere, into the hortus conclusus where there are to be found hidden all those relationships of reflection that constitute the structure we employ to look at the world. This happens both in the presence of the large installations into which the viewer actually enters, and of the works for which contemplation at a certain distance is the norm: in the first case the spatial aspect of the work predominates and our persona becomes one of the important points of the rapport we create with the elements present in the work; in the second case it is often the temporal aspect that initiates our reasoning. Because for Paolini it is always a question of reasoning, of using wisdom to establish substantially “why we are here”. With regard to his works, the two conditions of which I have spoken – spatial and temporal – do not have full equality or the same importance because the first condition I mentioned (the spatial state of the viewer within the work and the world) is subordinate to the second: in other words to the temporal condition of the thoughts of the viewer in front of – or within – the work.

And even if we are not completely in agreement with the Platonic idea that “to know is to remember” we are, all the same, fascinated by it almost to the point of allowing ourselves to wallow in loving contemplation of a world of ideas that pre-exists the world of things, and this fascination is hinted at by Paolini’s works. What is fundamental to the game that we give ourselves up to (though it must be pointed out that it is a rational game, one in which we hold tight to the reins as well as to the rules of our knowing abandonment) is basically memory, that original memory that is one of the keys, perhaps the very first key, for reading the work of this artist; and this is so even for his earliest works where the apparent simplicity of his premise, which verged on tautology, was nothing other than the logical and cultural basis on which he was to construct his whole successive edifice. I said “cultural”, but I would also like to add “Western” because this memory functions according to schemes that Western culture has made its own; this can be seen, above all as far as Paolini is concerned, in the works he formulated halfway through the ‘seventies. In fact this was the moment that the “logical” element of his work withdrew into the background and the “cultural” aspect took its place.
See biography