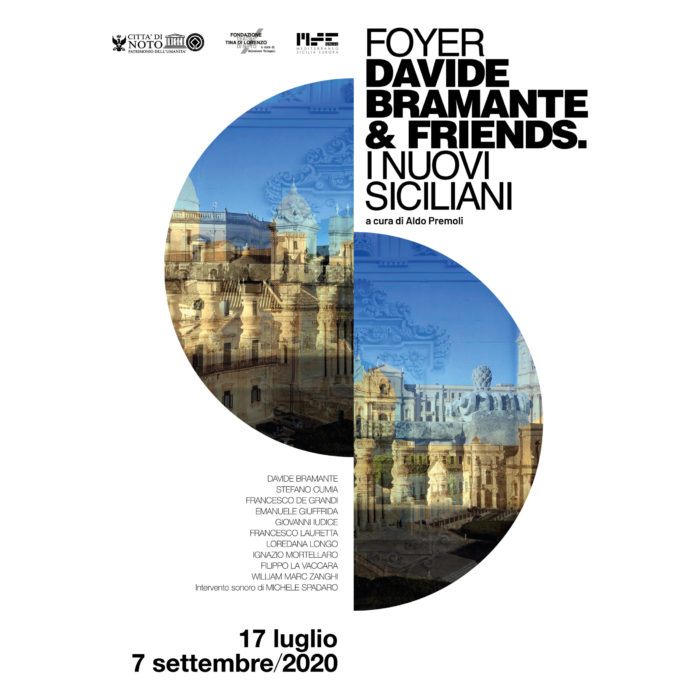 Nine Sicilian artists agreed to the invitation of Davide Bramante and Aldo Premoli, respectively front man and curator of this exhibition in order to show their works in the magnificent Tina di Lorenzo Theater, in Noto (Sicily). The theater had never accepted exhibitions before: it did so exceptionally this summer 2020 in the face of a program interrupted due to the Covid-19. Foyer Davide Bramante & Friends. I nuovi siciliani, from 17 July until 7 September 2020.

“I have always surrounded myself – instinctively, without any planning – as artists who have my same dreams, the same desires and in the end also the same origin. Artists who have tasted the same scents of our land. It was easy and, after all, nice to meet someone like me again outside the island. One step a day, but every day it went on. I met them in galleries and art fairs or art speech conference from all over the world … we started in a thousand, but now we are many less … “ Bramante describes in this why the profile of a generation. Some of them “left” the island: this is the case of Lauretta (Venice, then Turin and then Florence), Cumia and La Vaccara (Milan); Loredana Longo divides herself between Milan and Catania; Bramante himself who returned from Turin to Syracuse; De Grandi travels a lot but lives in Palermo, exactly like Zanghi and Mortellaro: Iudice and Giuffrida have chosen to gravitate respectively to Gela and Ragusa … even Spadaro, the sound designer has moved to London to return as soon as possible to Aci Castello. To know more: www.sansebastianocontemporary.it