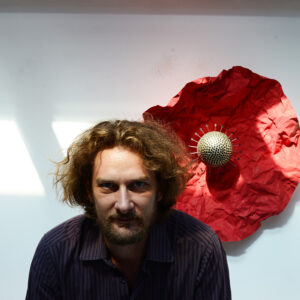 Christian Manuel Zanon was born in Padua on 22 January 1985. He lives and works in Vicenza. A gregarious and contradictory thinker, he trained at the Venice Academy of Fine Arts following a particular aesthetic route, then taken up again as a theoretical philosopher at the Ca’ Foscari University in Venice. At the Berlin UdK he inquired deeply into questions about visual communication and experimental poetry. He began to deal with photographic images as the Fondazione Studio Marangoni in Florence and followed this at the IUAV in Venice. As an artist he questioned fragments, at the time not yet persuaded that these can be the indicators of current and further landscapes.

The poppy is the object of last Zanoni’s show, a flower which, from a purely technical point of view, is described by the artist as a pivot holding up a painted and crinkled red sheet, while a shiny sphere lays out the pistils in a circle, simple pins that culminate in a coriander. This element, however, the flower, becomes far more than an object; it represents time, a memory, an emotion, the exact coordinate of a thought that is indissolubly tied to the colour red and that brings with itself an immediate feeling of happiness, light-heartedness, and lightness. A nostalgic return to the marvel of childhood, to the enchantment of nature, to the amazement for a flower lit up by the side of a road.