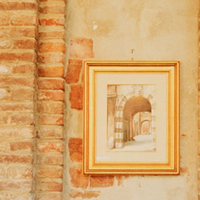 In 1984 Luigi Ghirri, in his seminal book Viaggio in Italia, embarked upon a project that began to define the role of photography in Italy. It is important to emphasize the role played by Luigi Ghirri during this period. Not only was he a photographer, he was also a theoretician, organizer, editor, and precursor to much of what was to follow in ensuing years. “When it comes down to it, perhaps the places, objects, things, and faces which crop up by chance are simply waiting for someone to look at them and recognize them without the scorn implied by relegating them to the endless supermarket of the “outside”. Perhaps these places belong more to our own existing situation than to modernity or to deserts and wastelands […]. Above all, I think I can see in all this a kind of state of necessity so that the landscape I spoke of earlier, the present place, might be transformed and not remain a place without history or geography”.

The conceptual aspect underlying Luigi Ghirri’s photography began to appear during the late 1960s, a period during which Germano Celant noted as a time when clichés took their place in the history of art. Clichés were the protagonist of Ghirri’s photos, evident in his very first images of the Siusi Alps made during this time. As has also been noted by Pelizzari, what was key to Ghirri was the role of Conceptual Art in relation to his ideas about photography. During his brief life Ghirri collected many images which he would frequently include in his photographs. Over the years he documented these photos in photographers’ shop windows, pictures, cuttings from articles on photography and much more. Ghirri wrote “Perhaps this is the feeling that guides me when I look at a landscape, the outlines of a face, the volumes of architecture, the colored surfaces of a wall, the wavering light of a nightscape, or the strange harmony that clouds confer on any landscape in the world”.
(Angela Madesani)
See biography