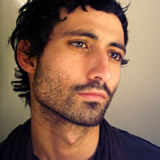 Somewhere in a subway under neutral lighting Pablo Zuleta Zahr has set up his video camera in front of a monochrome wall and held out for ten hours. In such places, one can’t distinguish between day and night and it’s only through the frequency of passers- by that one can decipher whether it’s bedtime or rush hour. But the video that forms here is in no way the product that we get to see. What he gathered in two ten-hour sessions in Santiago de Chile serves solely as material. Everyone that passes the camera is separated out later. Filed away, the passers-by await a new ordering in the panorama, sorted by clothing criteria. In doing so, no one is forgotten, no one is manipulated, no one appears twice. The actual course of the day is no longer interesting when Zuleta Zahr sets out to compose his scores from rhythms, forms, and colors.

These timeless recompositions have a poetic power that is based on the meeting of appearance and being. Until the eye detects the order in the chaos, the works initially have an effect like snapshots. The one picture shows a woman in fur, the other a secretary-type with a red blouse and a paper under her arm. Because they weren’t there at the same time they bustle past each other apathetically in the pictures, without poisonous side glances to the similarity dressed counterparts she could be mistaken for. Without any instructional gesture he tells us entirely off hand something about fashion and mass-produced goods, trends and stereotypes. Some, like the secretaries, appear to purposefully tailor themselves, others in contrast are blatantly anxious to protect their individuality at any price, which has even more grotesque effect the more frequently it crops up.
See biography