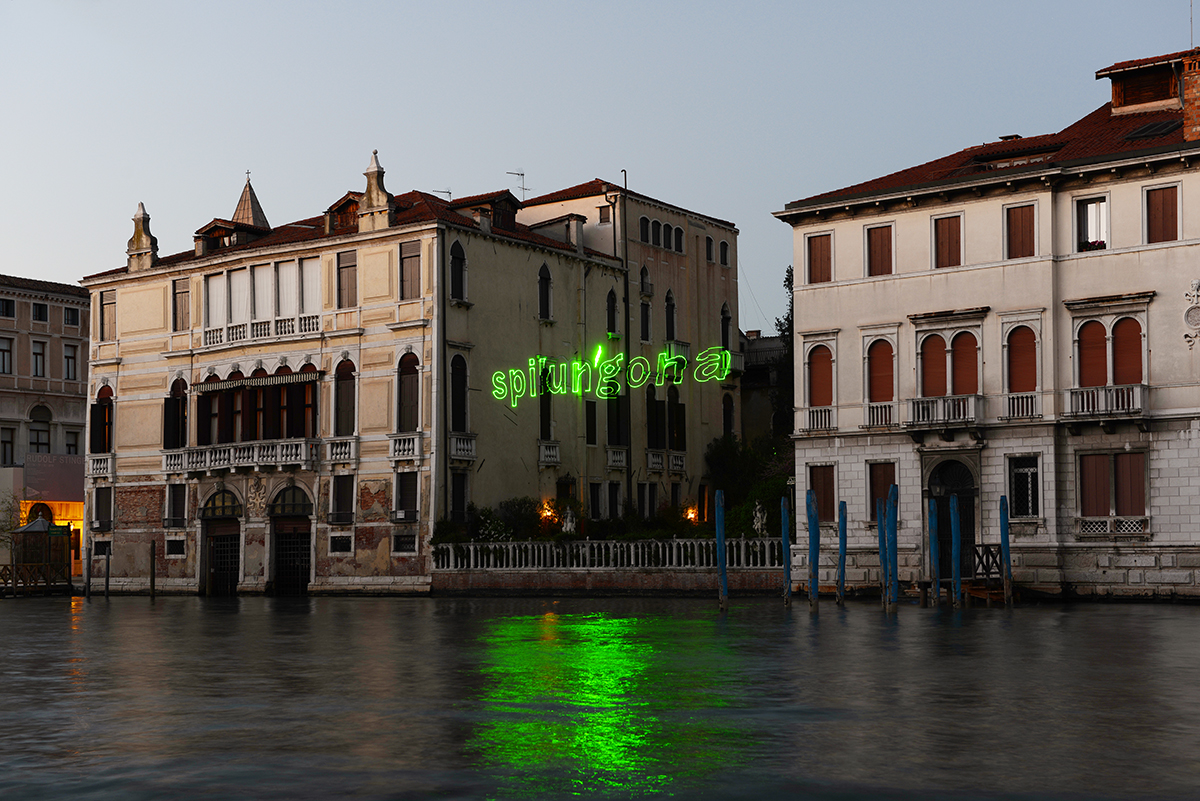 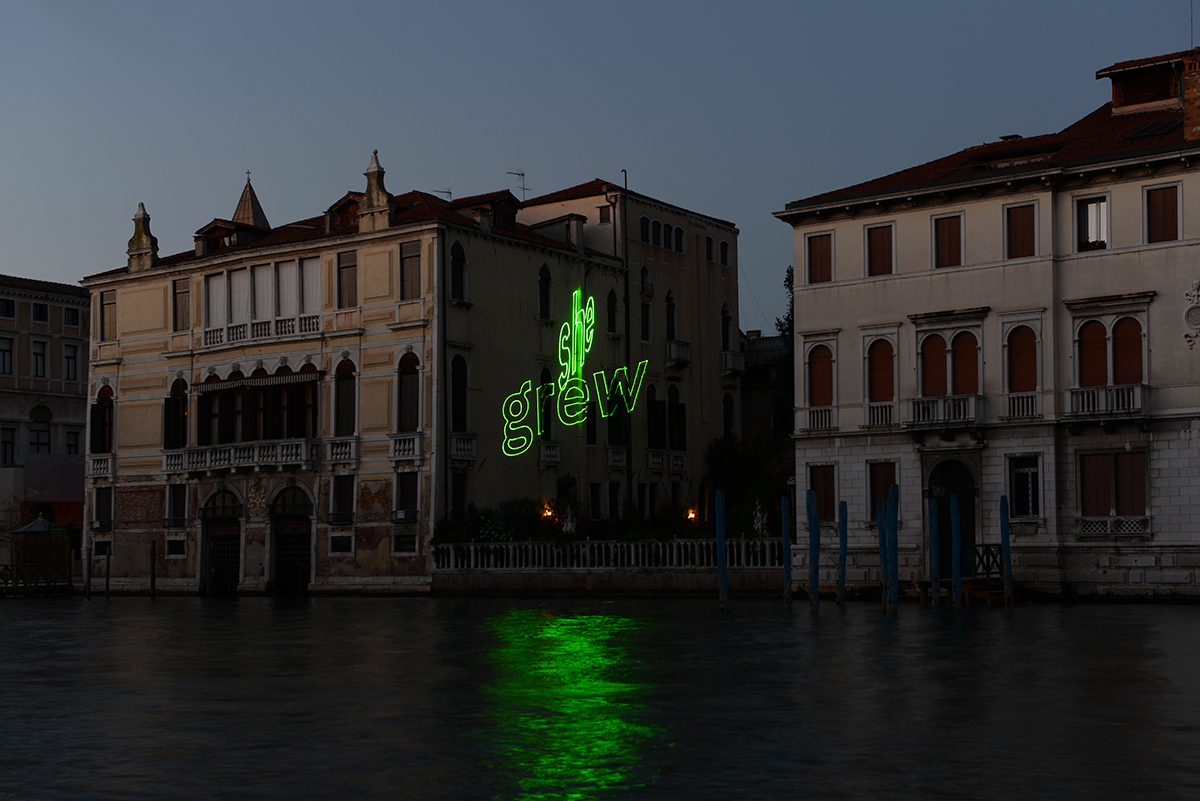 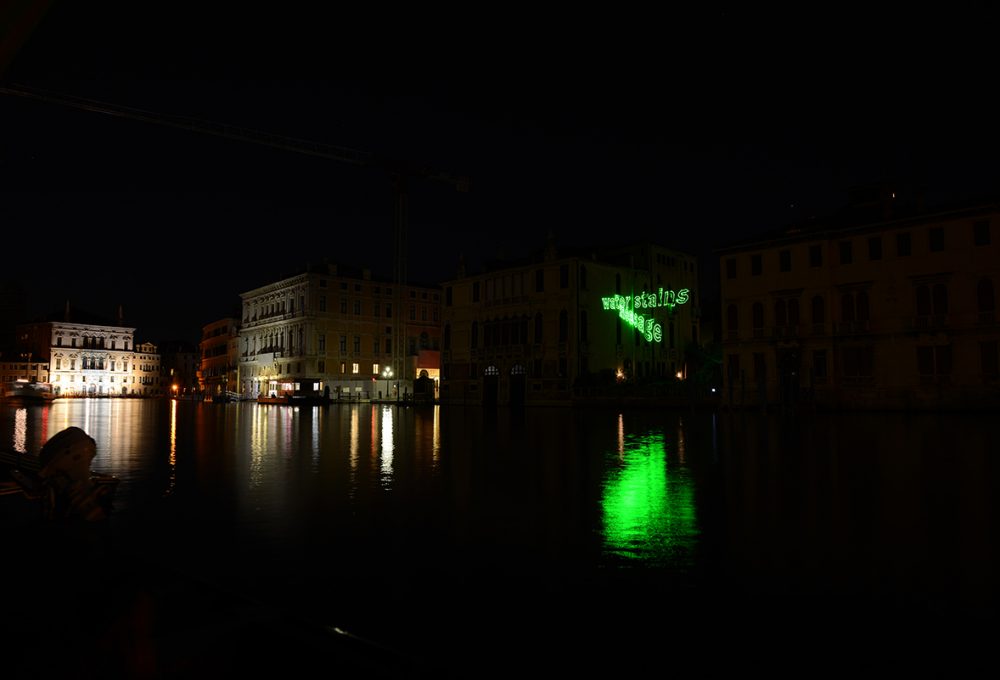 Words which revolve around an invisible axis, sentences suspended in the air above an enchanting garden, between the pediments of two buildings facing onto the Grand Canal which, like an invisible yet tangible side scene, define the union/separation between the public space and that private space which in Venice holds treasures that have remained inaccessible to the many. Precious Objects – Extraordinary Individuals is the new site-specific installation of the American artist Arthur Duff, who brought his unmistakeable green lasers to Palazzo Malipiero Barnabò during the preview days of the 55th International Art Exhibition of Venice (28 May – 3 June 2013). Duff, who was born in Wiesbaden, Germany, now lives and works between Vicenza and Marghera.
The project, sponsored by Studio Oredaria of Rome and Studio la Città of Verona, had been given a title that evokes the critical clichés typically associated with artistic production, according to which the artist has to be an extraordinary individual able to create precious objects, while the actual content encourages the spectator to engage with the concept and the perception of space. Duff projected the results of the survey he has carried out over the last two months onto the Palazzo and into the area of its splendid garden. The survey consisted of his sending emails to dozens of persons asking them to give an account of a precious object and an extraordinary individual in whatever way they liked. The descriptive part of these replies has been extracted and transformed into laser writings mounted in a visual and conceptual endless loop, which will be ever-changing to the gaze of whoever passes by in a boat along the Grand Canal. «The observer will be able to physically and palpably relate to the projected image created by green laser rays. It is a penetration into the Venetian urban landscape that is in contrast with the continuous sequence of façades of the Grand Canal usually seen by the visitor – explains Arthur Duff – given that the garden of Palazzo Malipiero creates a dimension that is both private and public, there being a very fine separation between the two spaces. The work therefore emphasises the membrane that unites/separates the two dimensions and intends highlighting the distance between the privilege of accessing an intimate and therefore inaccessible space and the public extolling of the same privilege»