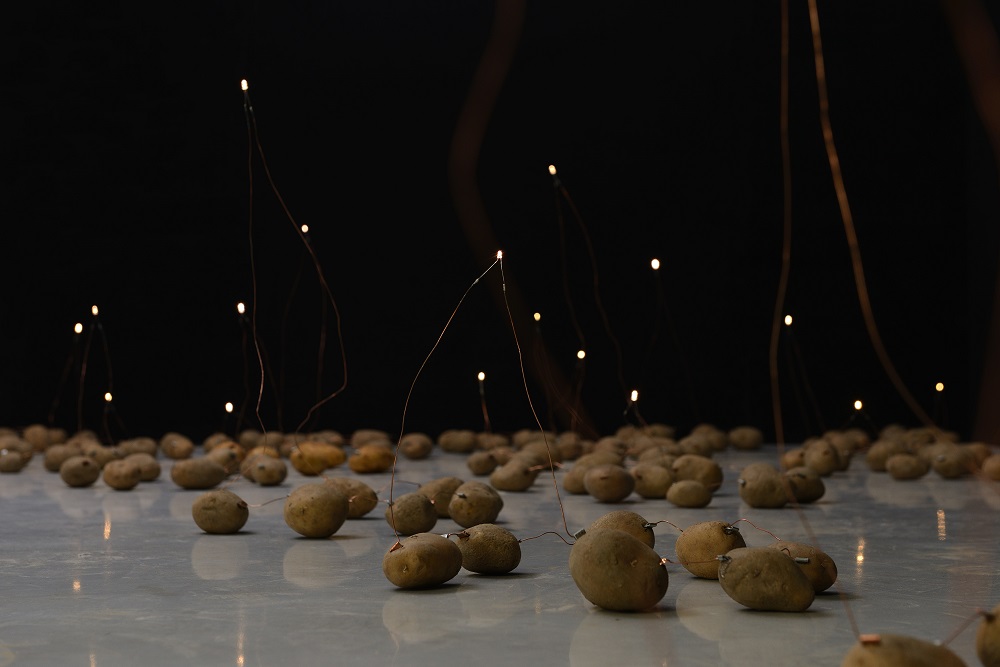 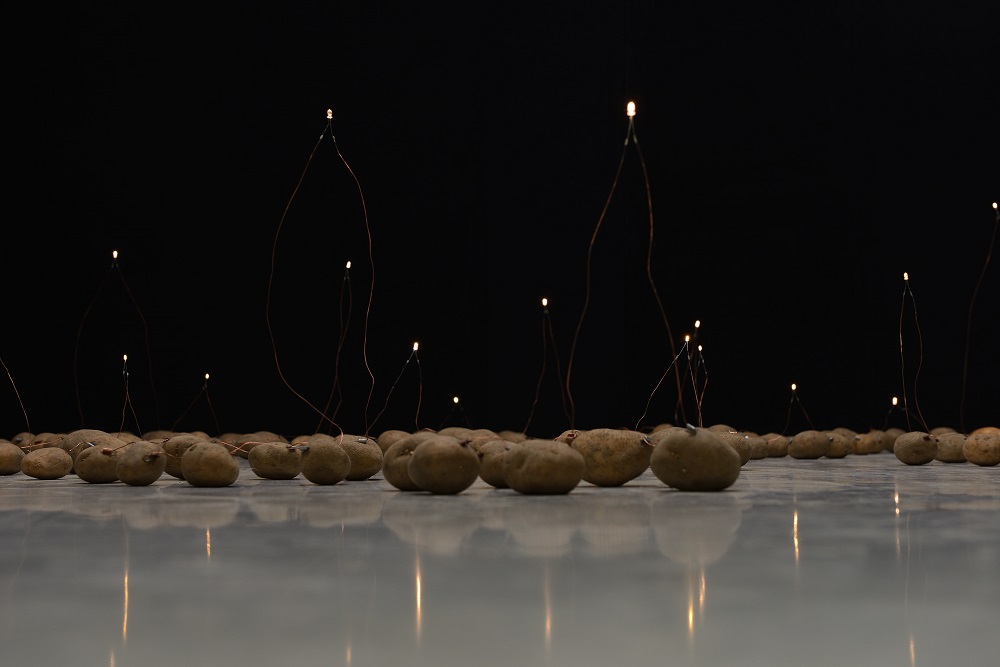 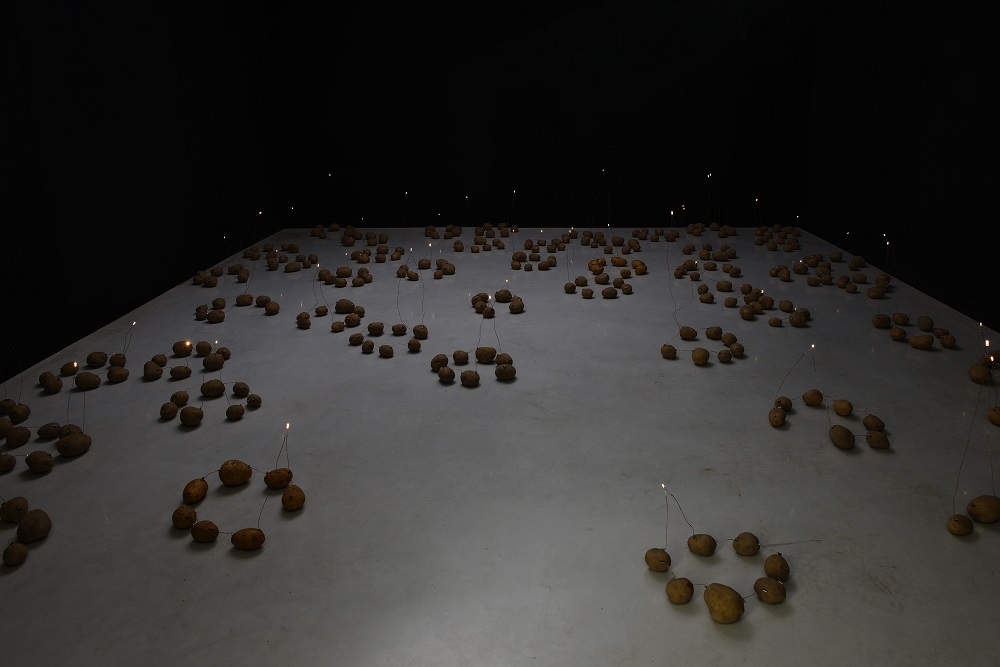 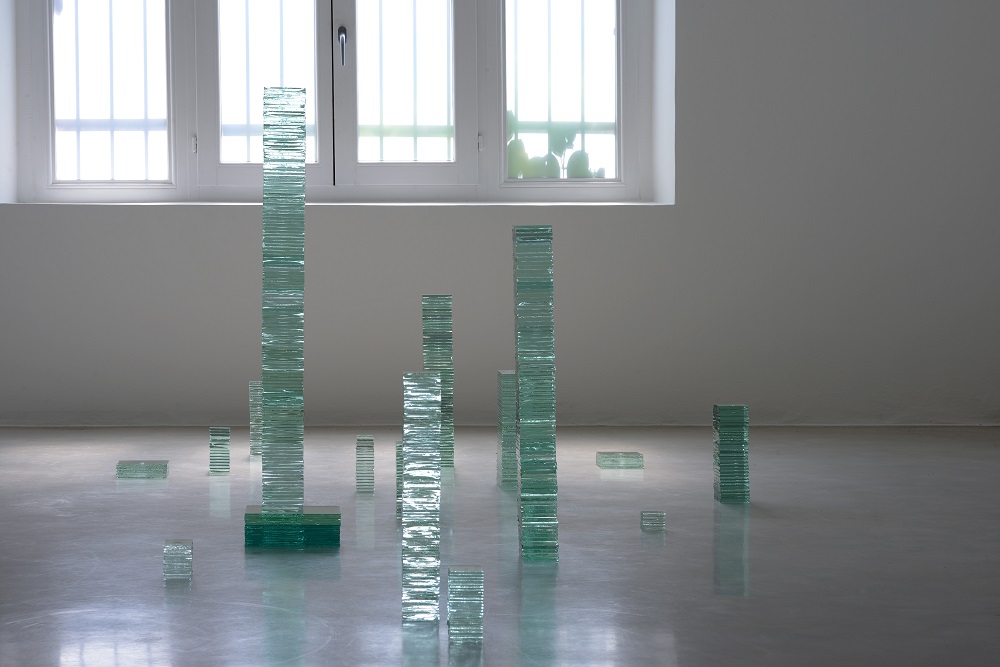 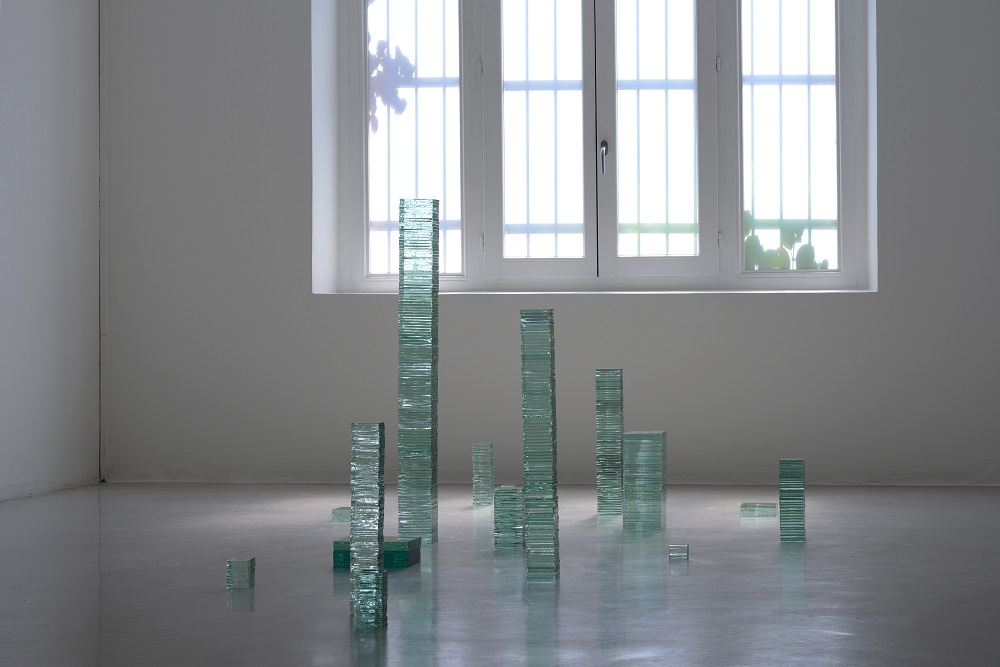 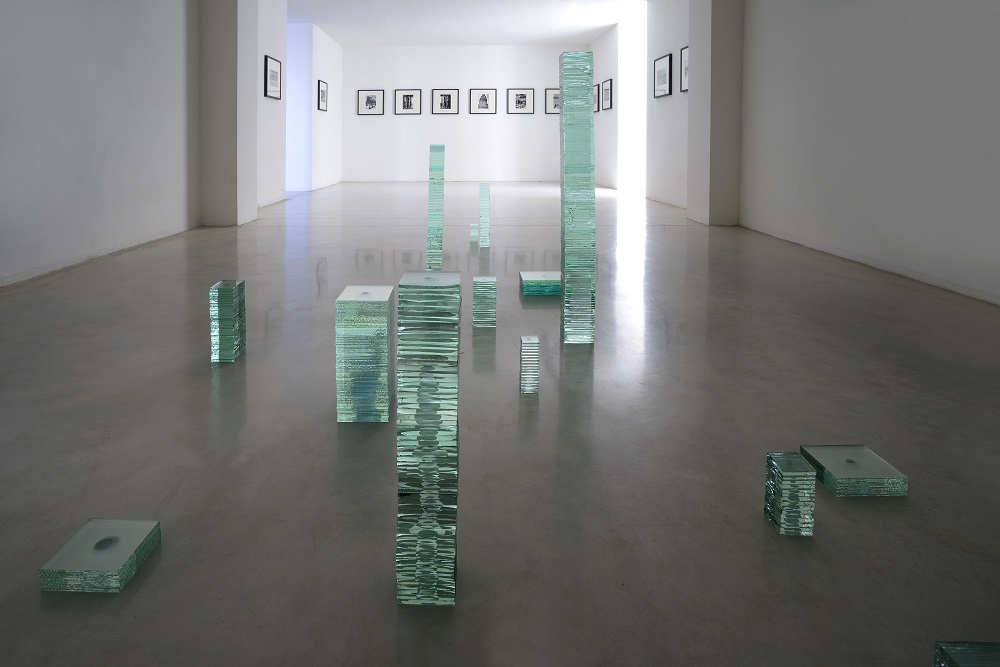 The artist, whose starting points for her works are various basic scientific axioms – such as, for example, the concepts of the reflection and refraction of light, electrical conductivity, or entropy -, in fact digs far deeper in order to inquire into the relationships between humanity and nature, chaos and rules, to create genuine miniature worlds.

The first installation the visitors will be immersed in, in the shade of the drawing room, is Isolated Systems Vol. 1, a genuine miniature ecosystem where Mathis will give new life to a simple childlike experiment by joining some five hundred potatoes in closed circuits of seven potatoes each, all lit with LED lights. Over the course of the weeks, the potatoes will lose their conductivity and will slowly become waste; the light in the room will become dimmer: a very human metaphor for our mortal parabola.

The American curator Erik Morse has described the work in this way:

Mathis has resurrected the childhood game of the potato lamp, a basic vegetable apparatus that is often displayed to illustrate to students the simple wonders of electricity. However, in Mathis’ hands, the quantity of these potatoes has reached nearly a thousand, with each individual zinc circuit soldered and assembled to an LED bulb by hand – a mundane but magical act that roduces a singular beam of light.

Transporting the instruments from her atelier in Zurich to Geneva, Mathis has transformed the darkened exhibition space of Piano Nobile into a labyrinth of copper wire and liquid crystal, alflight. The aesthetic result is the production of a world inside a world. Undergirding the sedate terrain is the perpetual dynamic of entropy, the will of the cosmos, doing and undoing, working and unworking, seeking equilibrium while nullifying itself. Part and parcel of Mathis’ installation is the attendant experience of lack…lack of space and light portrayed through its dimming contours. In order to illuminate its space to current visual standards, the exhibition room would most likely require more potatoes than it could hold, a disturbing parable of modernity’s ecological excess. As OuLiPo writer and urban phenomenologist Georges Perec notes in his essay collection, Species of Space, “Space is a doubt: I have constantly to mark it, to designate it. It’s never mine, never given to me, I have to conquer it.”

The second work, Isolated Systems Vol. 2, will instead occupy the floor of the video room where the artist will install for this occasion her mirroring glass towers of various dimensions and heights. Glass (the normal glass for windows, not the non-glare version for museums) is a material loved by Esther Mathis for its contradictory properties: it is cold, cutting, sharp, but also fragile and elegant. In this work the artist plays with optical effects that come about from the stratification of various sheets of superimposed glass, all joined by a dot of transparent glue. In this way the external surface of the towers becomes a mirror, while where the glass mixes with another material, glue in this case, it maintains its transparency to create a play of internal/external relationships typical of all things. The artist herself has stated in her own words the creative process that has led her to the creation of these “sculptures”:

By putting various pieces of this glass on top of each other, the surface progressively becomes a mirror because its reflection accumulates in the moment that light breaks against each individual layer. The layers are joined together with a drop of glue and, in these very connecting points, light penetrates with far less friction and so gives the impression of greater transparency, thus eliminating the mirroring effect. The form of my sculptures resembles that of towers – some smaller, others larger – that channel light through their external edges. But in the nucleus of the tower, unreachable and protected by walls of sharp glass, the glue almost seems to be a volume hidden inside it. It is soft, it seems to have a liquid consistency and, according to the point it is viewed from, it can change dimension or even disappear.