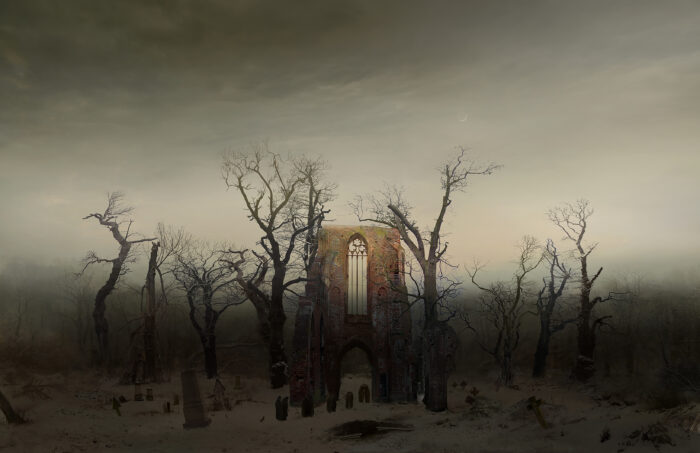 Hiroyuki Masuyama is one of the artists in the exhibition True Fictions. Fotografia visionaria dagli anni ’70 ad oggi, the first retrospective exhibition ever held in Italy of staged photography, a genre that has revolutionised the language of photography since the 1980s and its place among the contemporary arts.
With more than one hundred large-scale works on display, the exhibition demonstrates how between the end of the 20th and beginning of the 21st century, photography was able to achieve the heights of imagination and invention which had previously been almost exclusively the province of cinema and painting. Photography, the realm of (presumed) documentation and objectivity, had become the realm of fantasy, invention and subjectivity, thus performing the last decisive evolution in its history.
The Masuyama lightboxes on display belong to the After Caspar David Friedrich series, which is inspired by the famous German painter Friedrich, today considered to be the major exponent of Romanticism. Many of Friedrich’s works consist of various drawings made in the studio to develop the images of his ideal landscape. Masuyama, some 190 years later, has personally visited the places shown in the paintings and has shot photos in the same seasons and in the same meteorological conditions. Today, each work by Masuyama is then composed from some 300-500 photos which are assembled on his computer in the studio, in the very same manner as Friedrich, but with the help of today’s technology.