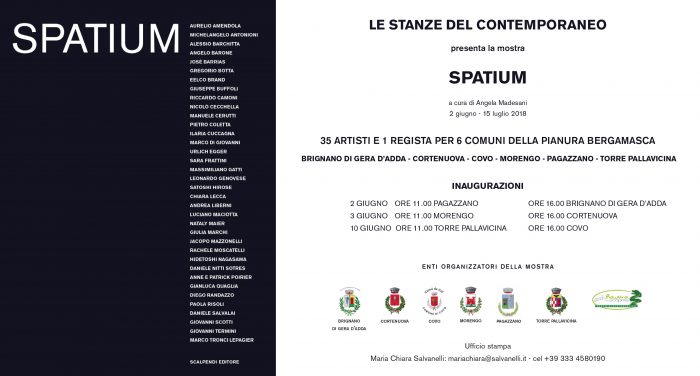 The exhibition Spatium, curated by Angela Madesani, the second of a series of shows held once  a year, Le stanze del contemporaneo [the rooms of the contemporary], opens on Saturday 2 June 2018. Ancient and contemporary dialogue and confront each other in special locations around the province of Bergamo, only a few miles from one another.

Spatium is a word that implies different meanings, as the exhibition: it represents the actual space, surface and the size of the rooms and places that host the artworks, but also the inner and physical space that the artists use. It also represents the space thought as a distance separating the various venues that the visitor has to go to, dialoguing with containers and contents, form and meaning, in a process of discovery of places, people and objects.

A big sculpture by Riccardo Camoni will be exhibited at Palazzo Visconti (Brignano Gera d’Adda), while Eelco Brand’s VWV.movi  and In Superficie and Le pietre di Jerwan by Massimiliano Gatti will be shown at Palazzo Botti (Torre Pallavicina).