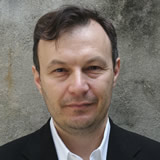 Luigi Carboni, has come to be seen as one of the most engaging Italian painters of his generation. And yet often he presents his work in the guise of sculpture… Misleadingly so, but purposefully so. His work in the mid- to late-eighties usually displayed geometrical objects that were loosely organised in relationship to a grid. This grid might be a metal rack or simply the way the elements of the work itself were arranged, but its ordering capabilities were strongly indicated and felt. This allowed an ambiguous play between the structure and the apparently freely applied paint, as well as between the painting and the solid forms of the objects which, in turn, referred back to the grid, the work’s backbone. The three-dimensional elements might at times disappear, but the surface of his canvases has

coagulated and thickened in places: paint stands up from the plane, it catches and reflects light and shade – but the repetition of certain forms whispers that the grid is still there, just as it was fifteen years ago, tying the incidents to the surface and allowing them to play in the knowledge that they are backed by a firm structure. And when three-dimensional forms are employed – as they often are without any immediately apparent reference to the traditional accoutrements of painting – their surface too exerts its pre-eminence: it may be gleaming gold or silver, crusty or smooth. But it still refers to painting: it is indicative that his “sculptures” can be arranged in any one of a number of configurations according to taste rather than to the artist’s predisposition.
See biography